Spotify recently released data showing that it had surpassed $2 billion in revenue with an 8.7% net loss. However, these were far from the most interesting data points that became public. The near doubling of advertising revenue, the fall in effective monthly revenue per user and the contracting margins are noteworthy.

Advertising Revenue Doubles But Could Have Been More

RAIN News points out that Spotify and the music labels are focused on optimizing conversion of ad-supported listeners to higher revenue generating subscriptions. As a result, a significant portion of Spotify’s ad inventory is dedicated to promoting its subscription service. XAPPmedia research suggests that Spotify could have generated $140 million more in 2015 advertising revenue if it had reserved that inventory for advertisers. That would reflect another 64% rise in advertising revenue.

Granted, this may have reduced subscription revenue due to lower total conversions, but at what point do repeated conversion attempts become wasted impressions? This analysis shows the scale of the advertising opportunity that Spotify is leaving on the table. Even if the company had sold just half of its spots used for subscription promotions, the company could have boosted advertising revenue by another 32% over its reported 98% rise.

Another point to consider is that advertising revenue per ad-supported listener rose 42% in 2015 compared to a 1.2% decline for subscriber revenue. This is a little different result than Mark Mulligan’s excellent analysis in Music Industry Blog, but I am only using top line reported numbers and have also smoothed out the total users to provide an average user number for the year. If I use the year end subscriber number, the analysis yields a 4.5% drop while Mulligan’s analysis suggests a 10.9% drop.

The key point from both XAPPmedia and Music Industry Blog analyses are that the average revenue per subscription user has declined and that the $9.99 per month published rate is not the effective subscription rate earned by Spotify today. Mulligan states:

“This is a result of multiple efforts to drive growth, including the price promos, telco bundles and student discounts. All of which are viable tactics but the fact they are necessary to drive Spotify’s growth underscore a point I have been making for years: 9.99 is not a mass market price point, and Spotify’s subscribers agree.”

(XAPPmedia has also looked at data over the years to reach this same conclusion. Our favorite is an analysis by the University of Virginia’s David Touve and summarized in this blog.)

All of these calculations lead you to the same conclusion. Average subscription revenue per user is falling while average advertising revenue per user is rising. To be fair, subscription revenues are far higher than advertising revenue, but royalty rights costs are also higher for Spotify for its subscribers on a per track basis. Mulligan includes an analysis that shows gross margins compressing over the past three years. 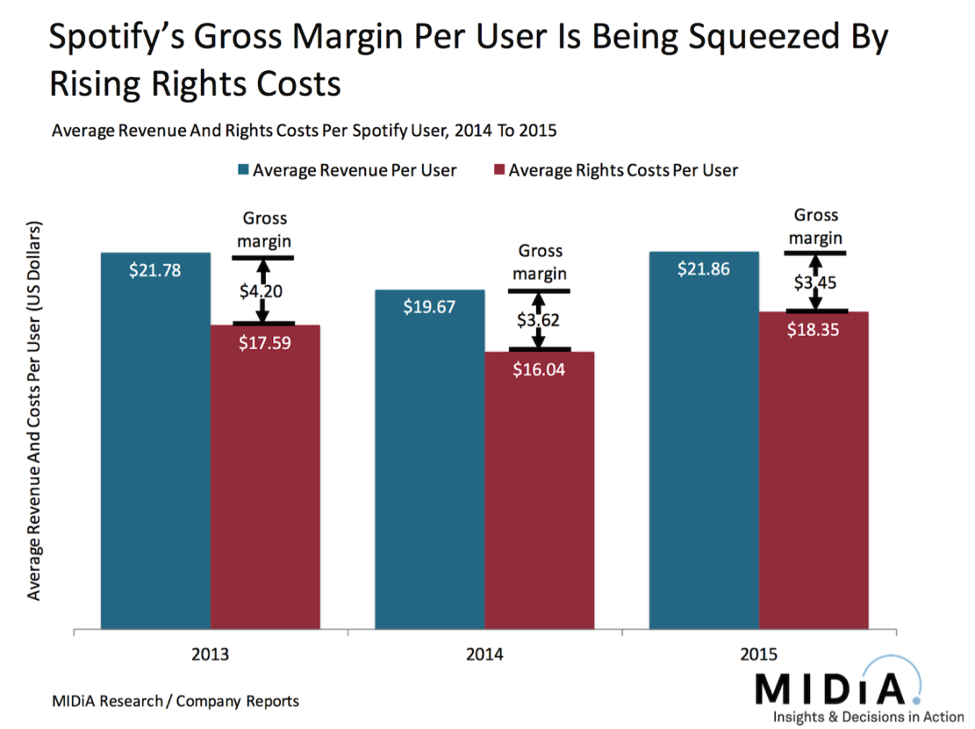 During this same period, Spotify has increased its percentage of subscribers in its overall user base from 25% to 31% and gross margins have fallen. Of course, there may be other factors at play here, but you can see from the data that shifting more users to subscription doesn’t improve the bottom line.

Where is All That Money Going?

There is no doubt that Spotify is a great story. They now claim over 100 million global users of which at least 30 million are subscribers. The company has a formula that consumers like. But questions remain about its economics. If Spotify is growing total revenue and is increasing its percentage of users on subscription, why aren’t its gross and net margins improving? The answer lies in understanding the byzantine economic models that rule the music industry. More on that tomorrow.